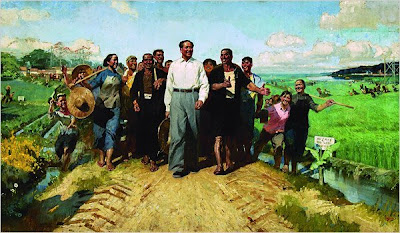 That's the name of an article in the NYTimes about an art exhibition in NY showing art from China's past, from the time of the murderous rule of Mao Zedong (or Mao Tse Tung as we knew him).

The painter Chen Danqing, active as a young artist during the revolutionary era, does not exaggerate when he says in the show’s catalog, “At the time I felt there was no difference between me and the Renaissance painters: they painted Jesus; I painted Mao.”

There is a difference.
Under totalitarian regimes you couldn't say what you wanted, you had to parrot the party line. And you couldn't paint as you wanted. You had to paint as they told you, in both substance and style. Those who tried to do otherwise were sent to "reeducation" camps. The communists had no use for art unless it served for propaganda. Any other kind was forbidden (a waste of time...).

Under Reneissance painters painted what they wanted. Some did Jesuses out of religious conviction, or because that's what their patrons (mostly the clergy) wanted and paid for. Others painted scenery, or portraits of other patrons. No painter was burned at the stake by the Inquisition, as far as I know (at least not for "incorrect" painting).