The impossibility of perpetual forcing.

At a talk given by J. Hansen at the Climate Change Congress, “Global Risks, Challenges &Decisions”, Copenhagen, Denmark, March 11, 2009, he said (inter alia):

The planet’s present energy imbalance, at least to first order, determines the change of climate forcings needed to stabilize climate. Climate models, using typical presumed scenarios of climate forcings for the past century, suggest that the planet should be out of energy balance by +0.75 ± 0.25 W/m2, … (absorbed solar energy exceeding heat radiation to space).
If all other forcings were fixed, a reduction of CO2 amount to 350 ppm would restore the planet’s energy balance, assuming that the present imbalance is 0.5 W/m2. If fossil fuel emissions continue at anything approaching “business-as-usual” scenarios, it is not feasible to restore planetary energy balance and stabilize climate.

Dr. Hansen seems to me to be saying the following: The energy imbalance caused by CO2 (and other greenhouse gases [GHG]) – causes the earth to warm up. (So far, ok). As long as the imbalance continues – warming will continue – ad infinitum. (That is, as other alarmist say – until Earth turns into Venus – 900 deg. C hot). The only way to eliminate the imbalance is to reduce CO2 (and GHG) back to their pre-industrial levels (or to 350 ppm). All this based solely on GHG considerations – ignoring feedbacks. (Dr. Hansen doesn't mention feedbacks in the presentation.)

This seems to me fundamentally flawed – glaringly false – based on elementary, trivial, physical principles:
Forcing – or imbalance - is a relative term, relative to some previous state. It is not absolute. Suppose CO2 goes from 280 to 560 ppm. This will cause the earth to warm, due to the "forcing", but, in the new, warmer state, the earth will emit more IR radiation into space, until a new balance is reached and the "forcing" canceled. The earth will be warmer – but the forcing will stop, and no additional warming will occur (unless GHG keep growing). Infinite forcing is an absurdity.

This can be shown by an analogy: suppose we have a big pot of water, and a small flame under it. The flame forces the water to warm, until the amount of heat introduced by the flame is canceled out by the amount lost to the surrounding air. At this point the water stays at a constant temperature, and doesn't heat up more, despite the flame. Now, we increase somewhat the flame. An imbalance, or new forcing is introduced (relative to the previous state of balance). The water will warm up some more, until a new balance is reached, and then stop warming.

To "stabilize" the climate – all we have to do is stop the GHG increase. Once CO2 is stabilized, at whatever level, a new heat balance will be reached, and "forcing" will stop. Thus, reducing CO2 back to pre-industrial levels is not the ONLY way climate can be stabilized. I'm not discussing the temperature magnitude at the new balance level (climate sensitivity), only the fact that forcing cannot continue ad Venusum, or even until the Greenland and Antarctic ice caps have melted.

Also, due to the logarithmic heat absorption curve of GHG – temperature will stabilize at SOME level, even if GHG continue to increase – which makes the notion of perpetual forcing doubly absurd.
Dr. Hansen claims that the ONLY way to stabilize climate is to go back to 350 ppm of CO2 , else –> Venus. This seems bizarre to me.
I can't believe Dr. Hansen could make such a primitive mistake.

I know I'm talking about an extremely simplified scenario where there is nothing but GHG. I know there are feedbacks in the world, and there is big uncertainty about their magnitude and even their sign. But Dr. Hansen doesn't mention feedbacks. He seems to say that just GHG cause infinite forcing. This is impossible.
Posted by Jacob at 3:33 PM No comments:

Roger Simon is writing about TBDS - Tea Party Derangement Syndrome - the opposition of the liberals to the tea party protests. People are protesting the enormous waste of public money by Obama's "simulation" plan. Curiously, or not so curiously, many on the left can't understand that this is a legitimate and reasonable protest and are starting to cry "racists", "bigots", "fascists" and all their usual cuss words.

Remarkable is the following comment on that thread:
Victor Erimita:

The Left is no longer composed of liberals, for the most part, and I wish people like Rush would stop calling them that. They aren’t any more.

Today’s Left is composed of Marxists, conscious or unconscious, people whose unexamined, knee-jerk opposition to enterprise and individualism has mostly been absorbed by cultural osmosis, not thought or analysis. They wear their politics like jewelry. Mix that college dorm Marxism with narcissism and immaturity, and you get tantruming at the audacity of any other expressed views.

Another strain of contemporary leftism is an ironically quasi-religious contempt for humans and individual endeavor, a kind of New Age of asceticism (always to be practiced by others) expressed in “environmentalism,” the so-called animal rights movement, the hatred of automobiles, the suburbs and other symbols of individualism. Half-baked notions of “The Planet,” big government and collectivist symbols like mass transportation have replaced God and the spiritually transcendent in the unformed minds of these solipsistic rejectors of the only kind of organized religion they can see—like Bill Maher they can only see the rigidly formed worldviews of others, not their own, and certainly not their own metaphysical assumptions. Tea Parties are an expression of the celebration of individual endeavor, a sin against their secular god of the state (or The Planet,) so they see it as evil, beneath civilized discourse, which ironically they themselves are no longer capable of. 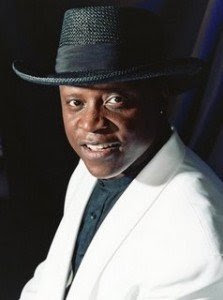 An amazing story about the singer (and painter) Lloyd Marcus. He was 19 years an alcoholic, and 15 years homeless, and now he became the star of the Tea Party protest movement in the US.

Read the story, it is an amazing story of sudden personal success.
Posted by Jacob at 1:19 PM No comments: