What caused the crisis 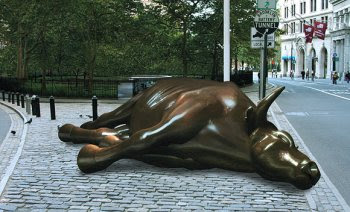 An incredible tale from an insider about the clueless, scandalous, ignorant way the banking system works.
"The era that defined Wall Street is finally, officially over. Michael Lewis, who chronicled its excess in Liar’s Poker, returns to his old haunt to figure out what went wrong."

"I’d never taken an accounting course, never run a business, never even had savings of my own to manage. I stumbled into a job at Salomon Brothers in 1985 and stumbled out much richer three years later, and even though I wrote a book about the experience, the whole thing still strikes me as preposterous—which is one of the reasons the money was so easy to walk away from. I figured the situation was unsustainable. Sooner rather than later, someone was going to identify me, along with a lot of people more or less like me, as a fraud. Sooner rather than later, there would come a Great Reckoning when Wall Street would wake up and hundreds if not thousands of young people like me, who had no business making huge bets with other people’s money, would be expelled from finance."
"I thought I was writing a period piece about the 1980s in America. Not for a moment did I suspect that the financial 1980s would last two full decades longer or that the difference in degree between Wall Street and ordinary life would swell into a difference in kind. I expected readers of the future to be outraged that back in 1986, the C.E.O. of Salomon Brothers, John Gutfreund, was paid $3.1 million; I expected them to gape in horror when I reported that one of our traders, Howie Rubin, had moved to Merrill Lynch, where he lost $250 million; I assumed they’d be shocked to learn that a Wall Street C.E.O. had only the vaguest idea of the risks his traders were running."

"Then came Meredith Whitney with news. Whitney was an obscure analyst of financial firms for Oppenheimer Securities who, on October 31, 2007, ceased to be obscure. On that day, she predicted that Citigroup had so mismanaged its affairs that it would need to slash its dividend or go bust. It’s never entirely clear on any given day what causes what in the stock market, but it was pretty obvious that on October 31, Meredith Whitney caused the market in financial stocks to crash. By the end of the trading day, a woman whom basically no one had ever heard of had shaved $369 billion off the value of financial firms in the market. Four days later, Citigroup’s C.E.O., Chuck Prince, resigned. In January, Citigroup slashed its dividend."